White Poppy – I Had A Dream CS 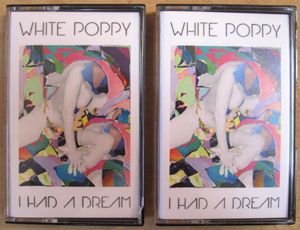 From out of the coastal, cloud-covered conifer forests of Canada’s coolest west coast enclave (Vancouver, BC) comes this blithe slice of exploratory gauze-pop majesty by one-woman guitarist-looper-siren-producer White Poppy (aka Crystal Dorval), I Had A Dream. The moniker conjures her soundworld astutely. The spiraling, sunblind ascent of “Wish & Wonder,” “In The Window”, and “Free” feel like levitating over fields of poppies, opiated pollen glowing gold in the air, while a scrappy, early 4AD/Rough Trade 7” obscurity’s rhythm section rides a lock-groove somewhere down by a glittering stream. Deeper in, “In Over” out-Cocteau Twins the CT’s (in terms of delay pedal sensuality), while “I Had A Dream” and “Treeforts” both percolate and pirouette dizzy blurs of electric guitar, practice-amp bass fuzz, cardboard drums and skywashed vocal mists. A lot of the songs have this beautifully bewitching ‘fantasy band’ vibe that makes the project feel less solitary and 4-track-y than its origins. A mesmerizing debut and hopefully a harbinger of things to come. Black ink on white shells with erotic digital collage artwork by Ms. Poppy herself.