Weyes Blood – The Outside Room CS 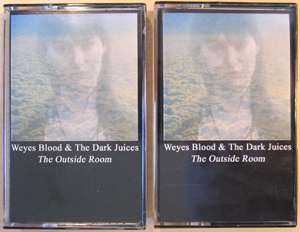 Limited leftover copies of this tour cassette edition of last year’s swoon-song classic, The Outside Room. Here’s the original NNF descrip: “The entire album was recorded, mixed and produced by Natalie Mering herself, then mastered by good friend Graham Lambkin. The record has shadows of The Shadow Ring in the oddly creaking ambient sounds and stark, nuanced production, which lend the eerily beautiful neo-Nico death-folk laments a more modern, art-skewed sheen. There’s still echoes of her old drone/tape-ghost-clouds moods on tracks like “In The Isle Of Agnitio” and the long, bells-laden outro to “Romneydale,” but the bulk of the LP is swooning and sweeping, with Natalie’s gorgeous, quasi-Teutonic vox leading the way. A subtly mesmerizing long-player, very “out of time,” and strangely untouched by contempo influences.” Pro-dubbed black tapes with photocopied lyric sheet. Edition of 100.