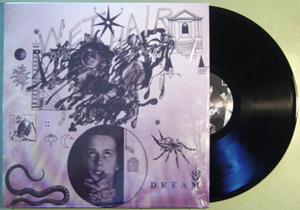 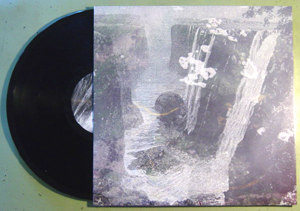 When Iowa City freak-out free-rockers Raccoo-oo-oon called it quits last year it left a bummer scar in the Midwest underground scene. But time is a great healer, and so are new bands. So out of the ashes of the RAC pack comes Wet Hair, a synth-punk-trance duo composed of keyboardist/vocalizer Shawn Reed and keyboardist/drummer Ryan Garbes, and Dream is the band’s debut vinyl full-length after a series of cassettes on their own Night People label. Piling together a trash heap of Suicide-style drum machine beat-bops, zone-droned krautrock keys, and mangled outsider crooning, the LP’s four tracks careen across a spectrum of moods and melodies. Recorded at Flat Black Studios by Luke Tweedy and mastered by Pete Swanson, Wet Hair’s cult electric annihilation has never gleamed with such razor-edged weirdness. Black vinyl LPs in jackets with artwork by Reed and Garbes, plus a pro-printed full-color 11×11 insert. CD edition available on Release The Bats.