Weirdo/Begeirdo – So I’m Dude In This Equation LP 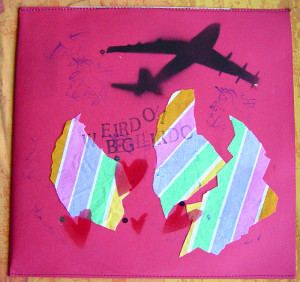 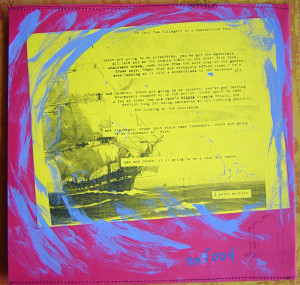 When we first met Britt always did this thing where he caringly referred to me as Broseph, Brosephini, Brodigliani, or even the benign “dude.” Couple this with his incessant desire to play both the ridiculous off-base babbler and the weary, nay-saying admonisher in conversational banter with himself, and you have the dumbo origins behind W/B’s enigmatic debut title. We glued every one of the damned sequins on these ourselves and I’m grossed out just thinking about it. So many treats and surprises you’ll be shocked to find there’s also sound where the sound comes out. Look, they don’t call it a debut album for nothing. Of pop-culture note: Joel says some guy at his work thinks this sounds like the Moldy Peaches. But we also read some describe it as “sloppily destroyed and bored insider pun-pop,” which works for us, thank you very much. Recorded in Las Vegas in August 2004 by Mr. Jacob Smigel. Hot pink LPs in hand-stitched card-stock covers glued with fabric hearts and sequins, painted, stamped and numbered, and packed to the gills with homemade inserts (bookmarks, comics, curiosities, etc). 300 made.