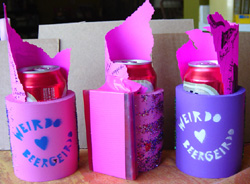 What’s so funny about inside jokes? Nothing. What’s so cool about beer? Duh, nothing. But Claire once drunkenly referred to us as Weirdo/Beergeirdo, which resulted in significant laughter/amusement, which led to a release concept that couldn’t be realized until all five of the WB’s were back together with hip HOPS and krautrock ALE-ments. This was of course long before Molly became obsessed with the query “como se dice chips?” which she used to ask the cooks at her coffee shop job. (Turns out the answer is “chips;” go figure). And now Molly’s only got six months to live, according to a pushy, but hopefully not psychic, bum who assaults her at her new book store job. Oh, and a beer comes with every tape.* So now there’s no mystery left: only the insanely blasted, tipsily overdriven crunked jam epic of Weirdo/Beergeirdo, and the glitter/confetti explosion all over yr car, too. It’s a messy one. Stenciled pink or purple koozies pink-duct-taped with a spray-painted tape, with a cardstock insert of a ninja-squid eating pizza shoved in. Limited to 50.

*If you buy this release online, we’re sending you a root beer. Thems the breaks, kids. (And it’s illegal to snail-mail alcohol without a license, probably).