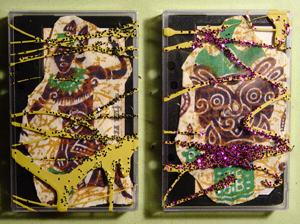 Huff on, heavyweights. The late summer smog seeps like slime into the sockets and circuits and strings and sweatsongs burning out from the east LA scorched earth, and Heavy Sets is a blurry Polaroid of the steam rising (and forming a skull). Documenting a pair of punishing mid-August live Echo Park meltdowns, the wrecked sets on this bible-black CS showcase the more nocturnal, wasted wing of the Rock/Eagle macrocosm, when the heat turns to fumes and the fumes turn to black light. Robedoor climb into a cauldron of seer’s soup and drums, the Pocahaunted fatales war-whoop with buried beats in the wind, and Sasqrotch wrestle a riff over a cliff of boiling mud. Street fights with sweet plights. 48 minutes of breathless brawl-space. Tape-labeled tapes in paint-streaked/glitter-encrusted cases, with a hand-cut piece of voodoo cloth. Edition of 100.