Skullflower – Taste The Blood Of The Deceiver LP 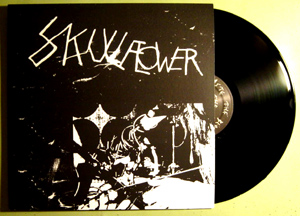 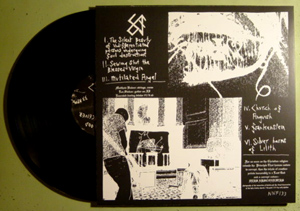 We’ve only had the good/loud fortune to witness Matthew Bower perform live on ONE solitary occasion, but the infinite incineration he managed to detonate out of a single electric guitar and knee-high practice amp was convincing enough to last several lives. In the meantime, there’s the gallons of celestial skree he bombards the listening universe with via his cavalry of audio aliases (Skullflower, Total, Hototogisu, Sunroof!, Mirag), all of which radiate with Bower’s iconic, influential, two-decades-deep quest to fuse the bruised with the blissed in a single white-light fist. And although his specific mission for each project seems to have crossfaded a bit in recent years, it’s still huge news to us to be able offer up Taste The Blood Of The Deceiver, the first full-length Skullflower album to be pressed on vinyl since forever (at least the early 90s). Taste The Blood finds Bower in the more blackened, doom-damaged terrains like those stripmined on the recent Desire For A Holy War or Pure Imperial Reform: abrupt vertical baths of blinding distortion and harmonic override spiked with cavernous cultish riffs and bleak ritual moods. Charred and forgotten, this is another stepping stone on the path to the upturned altar. Black vinyl LPs in fucked-up-and-photocopied matte jackets. Edition of 500.