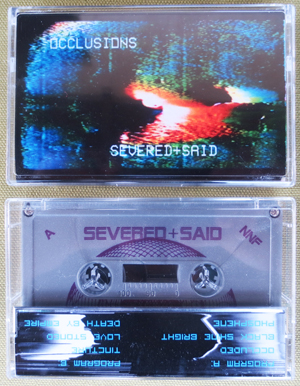 Jacksonville, Floridian John Touchton’s second release of ritualistic synthesizer music, Occlusions, is less soundtrack-ish than his last and hugely more sunken. The decision to blast his hardware through a trio of vintage amps before capturing it on the Tascam gives this set of songs a more physical aspect, thick throbs over signal buzz and low corridors of drum machinery. The pieces swerve from mechanical raga (“Black Shine Bright”) to tranced nightrides (“Death By Empire”) to Heathen Earth bass trenches (“Occluded”), but they share a processional heaviness and humid pulse. Six electronic stalker themes from under the shadow of dawn, the glow of gear the only light. Recorded in a warehouse in “the dark corners of Florida” in October, 2014 by Jeremiah Johnson; all instruments by John Touchton. Purple-imprinted silver metallic tapes in double-sided cathode-warp J-cards with images by Phantomphoton; layout and photography by Rebecca Rose. Edition of 100.