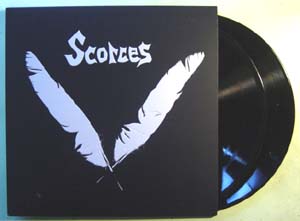 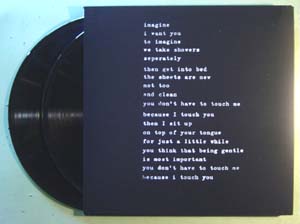 Most musics seem to cycle through rise/crash patterns of popularity and lately it seems that the duo formation is for some reason at the crest of its particular prevalence/relevance. Perhaps it’s something to do with the faster psychic communion that births between a pair (vs a 5+ gang-style band), or maybe it’s just to save on gas $$. Either way: very few fringe duos of the 2000s have succeeded in so fully utilizing the witchy, wordless, and wondrous bond of the twosome formation as Scorces’ twin figureheads Christina Carter (also of Charalambides, Bastard Wing, etc) and Heather Leigh Murray (Taurpis Tula, CEO of Volcanic Tongue, more). Their early incarnation as East Texas fried-folk loners instantly struck a chord in clued-in heads for both its bold formless experimental moods as well its instantly gripping emotional power. Their 2003 masterpiece on Eclipse, Vivre Avec La Bete, captured their magic craft perfectly, and in retrospect has definitely cast a heavy influence over a whole host of today’s underground’s voice-based lonesome drifters. So it is with amplified honor that we offer up this latest tome of spells unearthed from the Scorces’ vaults: I Turn Into You. Nearly 70 minutes of pedal-steel guitar tendrils, basement dust, whispered melodies, enchanted strings thrummed against haunted quiet, and possibly the planet’s single intensest dual free-crooning chemistry (as anyone who caught one of their Fall ’07 opening sets on the solo Thurston Moore tour can attest) sprawled across four spectral sides. All tracks were recorded several years ago back at Charalambides HQ in Houston, TX by psych-guitar journeyman Tom Carter, and they’ve aged like oil paintings (cracking, majestic, immense). Housed in embossed metallic-ink jackets designed by
Marcia Bassett (with a racy poem by the Scorces ladies on the back), plus an 11×11 insert with info, lyrics, and a live shot. Edition of 500.