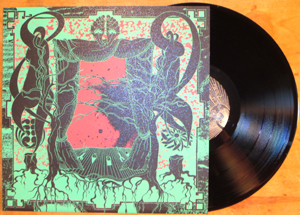 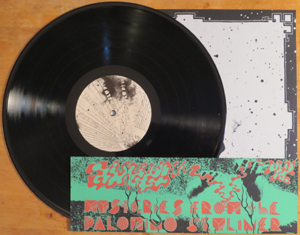 The precise nature of the sunship/cloudcruiser S.S. Palomino Skyliner remains unclear, but the crux of its charter seems be to facilitate celestial escape in one form or another. Its builder, Beau Devereaux (aka the one and only Samantha Glass), is perfectly suited to the task, self-describing his druidic harvest trances as “music for movement / leaving earth.” After years wayfaring through a series of brain-burned flux-psych ensembles he chose to put down roots in a solo universe, birthing the project in 2010, so it is with some anticipation and celebration we can finally present his nine-song, 41-minute voyage/vinyl debut, Mysteries From The Palomino Skyliner. Drawing from his ritual palette of mantric bass riffs, bleached goth keyboard patterns, and metronomic church organ drum-box rhythms, each hypnosis exercise unfolds according to its own unwavering nocturnal wavelength, as if played by a spirit-haunted sleepwalker, drugged by dreams. Among the brave mysteries of Mysteries: a subtly reworked version of “Seasonal Seduction,” the northern lights freefall opus from his 2011 cassette, Celestial Night Sky; the stargazing uplift joyride of “Lost Along The Way;” and the floating, out-of-body triptych, “Return To The Sky Part 1-3.” Great things come to those who wait. Recorded and mixed in Madison, Wisconsin; mastered at Ghost Sounds by Anders Peterson. Black vinyl LPs in ridiculously ornate silkscreened foldover jackets with artwork by Tokyo dream pusher Ryo Kuramoto, plus a photocopied insert. Edition of 440.