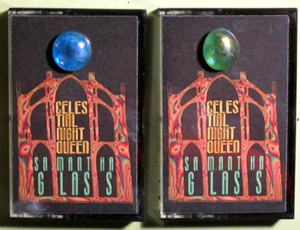 As far as sub-radar weirdo contempo-musico wormholes go, Radison, Wisconsin ranks respectably high on our list. Birthing bands as genius and utterly unrelated as Peaking Lights, Zola Jesus, Davenport, etc hints at a rare fiber woven through the general aesthetic-community fabric. Add another name to the roll call: Samantha Glass. Not a lady at all but one Beau Devereaux, who layers dubby echo keyboards over shuffling post-Suicide drum machines for a vibe that’s as much dreamy late nite DIY art-goth as it is cassette-warped drug groove. Celestial Night Queen is his second release under the moniker and he borrows the jump-cut field-recording-spliced sequencing style of post-Davenport hippie magicians Second Family Band (which he also moonlights in, fyi), giving the tape a cool outsider found-sound feel that adds to the intrigue. The opener, “Seasonal Seduction,” is his opus: nine magic minutes of freefalling organ gauze over a tranced bass/drum machine bounce-beat. Amped to hear more from this champ. Pro-dubbed tapes in cases with plasma-cathedral art by Manda B, plus a glass oval glued to each cover. Edition of 100.