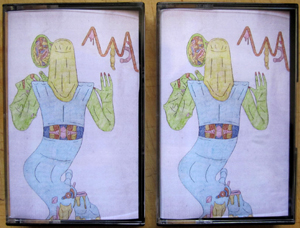 The early aughts were a heyday for musical freakery untrammeled by the spectre of success, which allowed for some much stranger figures to mine their muse in a public forum. Among these, few have kept the torch lit as steadfastly as Russian Tsarlag fka Russian Tsarcasm aka Carlos Gonzales. The Tsarlag Roadshow has cruise-controlled through thousands of moldy basements and trash-art toilets over the last decade, and each vagabond voyage has further enhanced his singular strain of mutant sleepwalk pop. Classic Dog Control Booth collects seven recent recordings for a half-hour hallucination of swamp-surf esoterica and encrusted field recordings. Get hip to his bleach party. Pro-dubbed tapes in full-color double-sided J-cards with color-pencil creepazoid art by Gonzales.