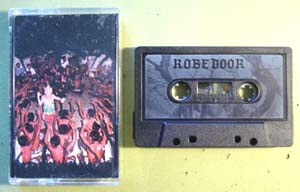 Two bleak teams pass the death pipe across this black lake of a tape, and the mood runs from dread to dead (or undead, same vibe). Robedoor’s “Terminal Abomination” finds them grappling their recent song-form style with bass, drums, and slime, a heavy metal swamp thing crawl that drips and riffs from the depths to deeper depths. A strident stalk across new weird wetlands. The B side is a suite of songs from southern lord Husere Grav, who operates from more of a bedroom black metal/death drone perspective, utilizing buzzing guitar, tomb tones, and the occasional drum machine plod to convey his message of relentless misery with strange elegance. Past self-released CDRs like The Great Empty and Stay Asleep have mapped similarly cursed terrains, but his five queasy pieces here are easily among his most cold and cutting ever laid to tape. On pro-dubbed cassettes, with artwork by Amanda. Edition of 150.