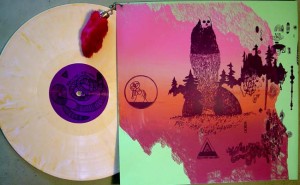 It feels like a trillion years ago that the musical universe collectively hyperventilated over the notion of ‘New Weird America,’ and thankfully so, as the catch-phrase was/is nakedly inaccurate. In contrast, Pre-American Lands tells it like it really is: insanely OLD. These are the sounds/songs of pre-concrete civilizations, resurrected by two of our country’s most mystic gangs of dream-beard antiquity-drifters. Iowa City’s Raccoo-oo-oon commune with dirt, drums, smoke, and tongues to ignite a sky-burning convocation of psychedelic exorcism and mumbled animal prayers. On the B side, Brooklyn’s Woods wander but are not lost, with stumbling strummed strings treading through a dense brush of forest jazz clatter and mossy electric hum. Pressed on blurry cream/sun vinyl with purple runic art labels and housed in awesome skull-magik screenprinted fold-over jackets (courtesy of Shawn Reed of R-coon), and adorned with a fortune-ensuring synthetic rabbit’s foot. Edition of 400.