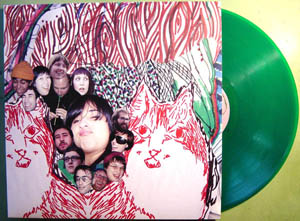 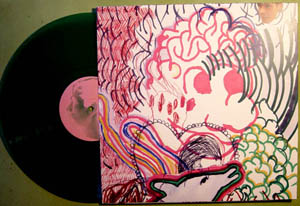 L.A. is a sprawl, no doubt, but the deserts get dryest out in the sick sticks of Riverside. Ever since we first trekked out to the Pixel Palace (R.I.P.) and had our skulls redefined, the 92501 crew have struck us as maybe the truest keepers of the So-Cal houseparty-bombing freak-wave flame. The scene’s since changed of course, but these two bands were/are the kings of old-school Inland Empire radicalism. Quem Quaeritis are no more, sadly, but the trio’s jams here show beyond a shadow of a doubt why they fucking ruled. Jesus-bent weird-hop, Laker boat free-jazz, and post-political tent spiritualism mesh into a holy trinity of lunatic Americana. No genres, no rules, spring break freedom turned inside out. Child Pornography have been rocking/annoying west coasters since nearly 9/11, and their game still ain’t up. Nine spazzy rants of Suicide-on-pixie-sticks Casio-babble, dumb-wave guitar shred, and helium-keyed stream of consciousness word barf. Enough outsider vibes and confusing nonsense to irritate even the stone-chillest board-short bro. In fancy printed matte jackets with face-collage scribble Erin Allen artwork, on kryptonite green vinyl. Edition of 420.

Audio-Visual Sample (not from LP)