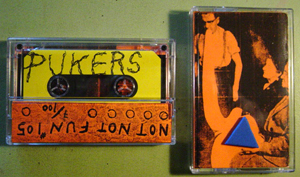 ”Where are you going, what are you doing, you’re doing a bad job, you’re doing a bad job.” Lyrics like these – and song titles like “Look at Me” and “Don’t Look at Me” – are what elevate Pukers’ meta-thrash into an even wilder arena of high art internal debate. Beach cops aren’t the only law enforcers brought to task on this savage C32; bike cops and park cops get equally brutalized. Since semi-temporarily relocating to Culver City/LA, Pukers have ditched the dead dog worship for a more conceptual crowd-surf across the polluted waters of stream-of-songciousness. The results are sick and blazing. Especially seeing as how the A-side finds Britt sitting in on electric axe for a session while the B stars Manda’s intuitive six-string primitivisms. This is some supergroup shit. Cardstock J-card in a case covered in weirdo foam shapes. Edition of 100.