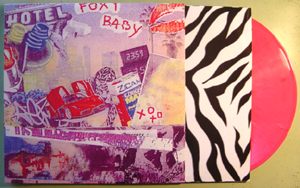 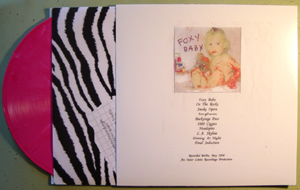 Of all the magical inverse-universe pop-whiplash genius loosed upon the world by the short-lived Outer Limits Recordings operation, few confound as righteously as Foxy Baby LP. Recorded the summer of 2008 in Berlin within a lifestyle of nocturnal glitter-damaged visits to extraterrestrial discotheques, the album conveys a strange, fragmented story of an adrift artist who has an encounter with an otherworldly woman (the titular Ms. Foxy Baby), becomes obsessed, loses her into the cosmic blur of the city, then slips after her backstage at one of her shows where they share a final cigarette while staring out across the metropolis’ skyline, then ascend into a holy void of alien lights. Or something? The specifics are unclear but the songs say it all: tape hiss glitter-damaged new wave interspersed with tripped FX interludes of revving cars, astral bubbles, and sparkling echoes. A total bizarro concoction from one of the planet’s bizarro disciples. Lipstick-colored vinyl LPs in zebra-print inner sleeves in bleach-copied jackets with artwork by Mr. Outer Limits himself.