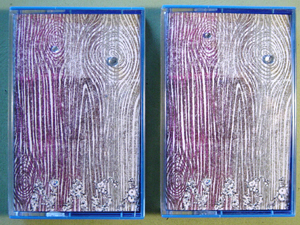 These post-everything (noise-rock, kraut-punk, thrash-psych) post-Floridians (they live all over the place now…Canada, East Coast, etc) have a savvy knack for mainlining that exact slow-burn basement car crash guitar/drums detonation that makes us wanna simultaneously mosh, steal a skateboard, and put out a tape. The previous NASA cassette on NNF (Bummer Daze) rolled in more of a groove-damaged Blues Control demo mode, and the production was kinda clean and line-in sounding in places. But Diamonds & Wood (in addition to being the name of a bangin’ Underground Kingz song) is in fact an earlier NASA album, recorded back in 2006 and originally released in an edition of 24 on their own H Tapes imprint. We’ve always wanted to reissue it for more ears, and happily that day has come. A staggering hour-long descent into frenzied depths of overdriven riffing, drum abuse, and distortion psychosis that seems to get inexplicably more and more lo-fi as it grinds on, this is what the teenage garage bands of America in our dreams sound like. Sloppy, shredding, surreal, sick, and stupid in equal parts, NASA at the height of their Epcot Center-based powers were nothing if not a shining example of low/high/no-art primitivism in its most gutter and uncut form. Take it or leave it. Pro-dubbed and imprinted tapes in cases with full-color artwork designed by Manda. Hand-numbered edition of 100.