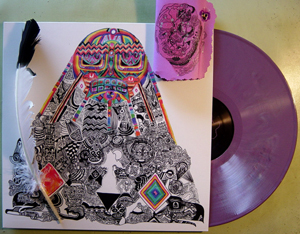 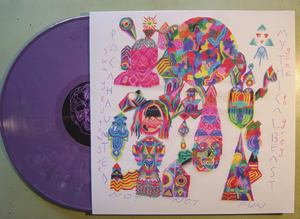 If the body is a temple, then the human voice is the Om pulsing within the architecture; and if the body is a corpse, then it’s the afterlife ghost-mist hissing up from the dirt. Point is it’s a force, as explored via the vocal ritualists on this split LP. Drone gypsies Mythical Beast have spent the last few years drifting from N’awlins to Austin to Kansas City, and their piece here (“Gone to Grey”) throbs with a weary hypnosis, too many nights spent staring into foreign freeways, alien landscapes passing in the dark. Feedback-blues for the rootless. Pocahaunted’s side is crushing, low-lidded amplifier chant of clanging guitar and primitive distortion, treading even deeper into twilight static than their recent Native Seduction CDR. Opaque violet LPs in pro-printed jackets with colored-pencil tomb rumination artwork by Devon Varmega, plus an eagle feather. Direct mail-orderers also receive a bonus MB/PHAUNT split C22 with exclusive material by each band, available while supplies last). Limited to 380.