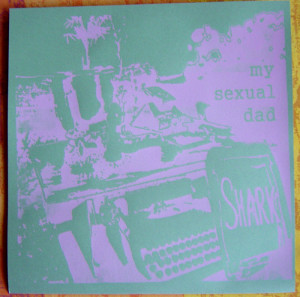 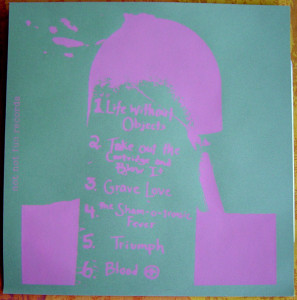 An important thing to keep in mind while pondering Shark is that it has nothing to do with sharks. No fins, no razor-sharp teeth, no cartilaginous skeleton of sinewy deep-sea terror, none of that. Think, instead, of its abstract predatorial connotations, the implied prey in the equation, the hunt, carnivorous lust and bloodbath climaxes. This is the shadowy, metaphorical monster Evan, Evan, Annie, and Joel sketch out for the listener on their stormy debut. It’s top-of-the-food-chain rock, and once it sinks its jaws into yr thigh, the only method of escape is to punch it as hard as you can in the nose. Olive-green LPs in silkscreened fold-over sleeves designed by the band, plus a photocopied insert. Edition of 300.