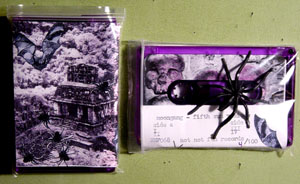 Watching Steve Gunn’s fingers fly as he shred-drones an acoustic guitar is probably the chief joy of witnessing a GHQ set (at least, it was for us this past summer when they rolled through L.A.). But when he’s not on the road with Magik Markers or GHQ or lord-knows-who-else, he builds buzzing structures of six-string acid navigations under the guise of Moongang. Past dispatches (mainly self-released) have ranged from tranquilizer ragas to swarming ritual noise to blissed emptiness, but Fifth Sun Visions offers up yet another orbit path in Gunn’s solar system. Urban field recordings slowly dissolve into stumbling folk trances while buzzing clouds of unease drift through the sky; later in, thick riffs emerge, bathed in black light, shot through with crawling undertones of templar apocalyptica. An awesome oracle of ruin from one of NNF’s favorite psych shapeshifters. Purple tapes with painted skull labels in bags with full-color shadow-shrine collage covers, plus a black spider. Hand-numbered and limited to 100.