Malibu Falcon – How Is Hell Fact Met? All Of Them Witches CS 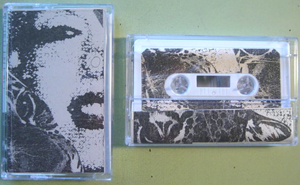 Hello, history lesson: those who forget the past are condemned to check it out via limited cassette reissues (or something). Malibu Falcon was an early aughts act from Portland, OR that existed sporadically for one-off shows and recording sessions and starred west coast lifers like Eva Inca Ore and Nick Bindeman (plus others) amongst its ranks. Live sets were rare, releases even more so, and the combined forces of life and other band commitments soon dissolved the Falcon before a wider awareness could be achieved. Alas. So we are lucky to have on hand this salvaged anthology of 60 minutes of prime time heart-of-weirdness MF legacy. Low basement bass lines pulse under primitive sheets of guitar feedback while Eva alternately whispers, banshee screams, and rants fucked up poetry stories about LSD, boa constrictors, and stealing babies. The general audio vibe is so heavily art-damaged it’s impossible to tether to any specific scene; too mind-fried and visceral for the ‘proper’ experimental set but way too raw and psychotic for any kind of psych rock/pop association either. Total crevasse music, lost in limbo, PSF DIY dreams, untapped and unconscious, confusion isn’t sex. For fans of freaks. Pro-dubbed tapes with collage art J-cards by Eva Saelens copied on metallic paper. Edition of 100.