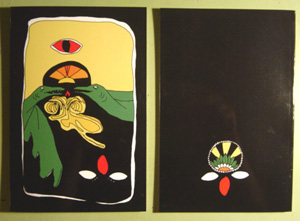 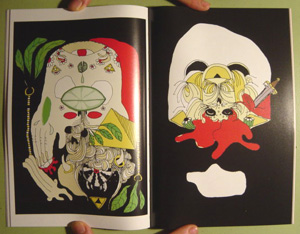 After some 27 LPs, 48 tapes, 25 seven inches, 33 CDs/CDRs, and 4 ten inches, the time has come for Not Not Fun’s first foray into the weird wide world of book publishing. And there’s few better NNF BFFs we could hope to share the launch off with than Fuck It Tapes/Woodsist CEO (and Meneguar/Shepherds/Woods multi-instrumentalist) Jeremy Earl. Since early on in FIT’s adolescence, he began incorporating his own loosely composed symbolist/primitivist designs into the label’s aesthetic (highlights like The Brain Band and Blues Control’s Riverboat Styx J-card come to mind), but constant focused labor and the endless march of new projects forced his craft into a heightened state of evolution, birthing countless killer compositions along the way. SKULL is here to pick up some of the choicest pieces from bone-yard and bind them all together. The art inside spans several years worth of work, from 2006-era obsessively rendered ritual serpents and bleeding, 8-fingered hands up through Earl’s most recent experiments with collage and multi-media hieroglyphics. Over a dozen of his most striking and iconic cassette covers are included as well, in addition to scores of never-before-seen images. Dazed pterodactyls, radiant pyramids, possessed worms, faceless figures beneath winged specters: all lurk and loom from the eye of the SKULL. 40 full-color pages, professionally printed and bound, in a one-time edition of 500.