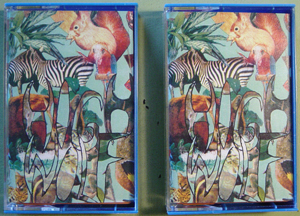 For some random reason unexpected pleasures are superior to the expected variety, at least 9 times outta 10. And so it was when we happened upon the dizzy/fizzy music of French loop enthusiast High Wolf for the first time, regarding whom we had zero preconceived notions. The wolf-based band name seemed suspect (there was such a deluge of ‘em back in 2003-ish we all got sick) but beyond that it was pure unknown. Cheers to open minds/ears then, cause the High Wolf audio worldview is weird and wobbly and one that should appeal to all lovers of tripped out, swelter-zone equatorial electronics. Animal Totem is High Wolf’s debut release, and it piles wavy, tranced keyboard melodies one on top of the other into a pulsing ritual heap of colored smoke. Elsewhere he slips in sunset fuzz-guitar lines and temple meditation tones and even dangles down some flanger-flecked synthetic percussion like a bunch of mellow yellow bananas. Take a look up/down/all-around. Overall it’s a rich, ripe rumble in the escapist-psych jungle. Pro-dubbed cassettes in cases with full-color animal-collage artwork by Amanda B Brown. Hand-numbered edition of 100.