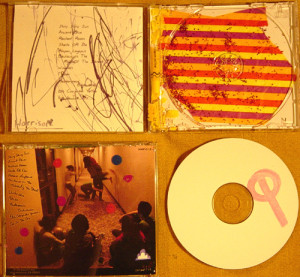 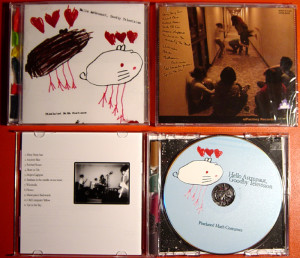 Okay, they’ll admit to ripping off Sonic Youth, wanting to sound as epic as Radiohead, and disliking Nirvana. It’s faux pas all over the place with Hello Astronaut, Goodby Television – the most insane, lovable pop-thrashers outside of Downey. Our favorite HAGTv details: Luis works at Sizzler round-the-clock and once compared his band to Fleetwood Mac (“we like fight all the time but we write the best music because of it”), Tori is a straight-up badass who cusses, wears tons of black eyeliner, and plays the keyboards and drums AT THE SAME TIME, Matt has styles upon styles upon styles upon styles (i.e. he wears nice cologne and Stray Cats shirts), and Dani isn’t afraid to tell you that she’s been both a raver and a goth and that her bass parts are really hard. They could be metal, they could be hip hop, they could be the best thing ever. First edition of 200 rubber-stamped CDRs in hand-assembled jewel-cases splotched with melted crayons and glitter; 2nd edition of 800 pro-manufactured CDs in hand-assembled jewel-cases with crayon fragments in the spine co-released with Olfactory Records.