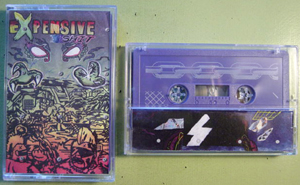 Named (possibly?) after the scorching ‘75 Fela LP inspired by an incident wherein Nigerian cops planted a joint on him but he ate it to destroy the evidence forcing them to detain him until his feces could be inspected, Expensive Shit are a wrecking crew from Austin specializing in freeform riff carnage of the rawest order. By their own admission they cite their influences as “sludge meditation” and “winging it,” with a band policy of “no practice, we play anywhere.” True to their word, Powwow With Chopper, the band’s debut, off-roads through gnarly terrain: shredded avalanches of feedback, pummeling garbage drums, mono-chord ascension/destruction, etc. No maps, no middling, just blood rainbow streetfighter improv chaos. Pro-imprinted tapes in double-sided full-color J-cards with Zangief chain fight artwork by Pittsburgh rip-nagogic scholar Spencer Longo.