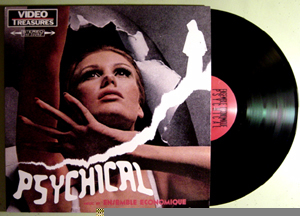 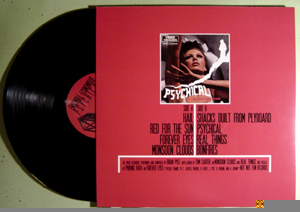 Brian Pyle is well-known for his enterprising shamanism as one half of Nor Cal improv gurus Starving Weirdos but when off-roading as Ensemble Economique he tends to uncover even weirder psychogenic artifacts. Psychical is Pyle’s newest full-length and also his most drugged and dense. Thick, humid banks of synth-fog descend over looped, cultic hand-drums, strangely panned waves of brainwash, and snippets of third world voices mumbling about blood and marijuana. As the name half-jokingly implies, EE is Pyle’s solo vessel, although his wife Phoenix intones some possessed poetry over the war drums of “Forever Eyes” and Tom Carter (of Charalambides) cameos with searing white light guitar on the creep-out raga, “Real Things.” The pieces dissolve into one another like a dark-trip soundtrack, tracing an upriver lost soul convoy into hostile territories, spectral voices murmuring like an impending monsoon. Black vinyl LPs in jackets with occult VHS artwork by Amanda Beth Brown.