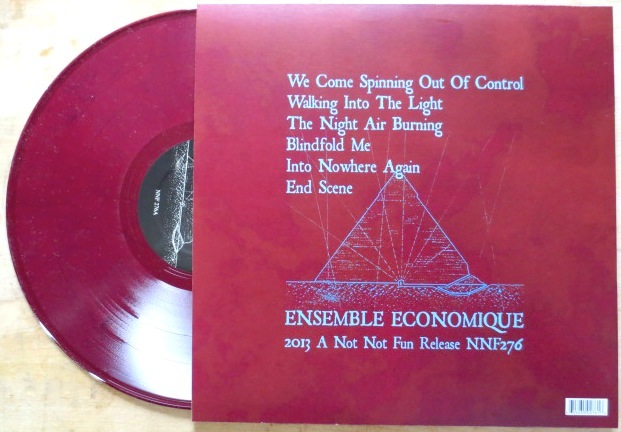 Ensemble Economique has emerged as an unusually planet-circling creative valve for Arcata, CA beachcomber Brian Pyle. The last year alone has seen him backpacking through Scandinavia, Europe, and Russia – twice. Maybe his spirit’s too absorbent then, cause he’s brought back some deeply heavier moods and ancient world weariness from his travels since his last outing on NNF, 2010’s demonic tribal monsoon, Psychical. Recent splits with similarly instinctual psychedelic unclassifiables like Lee Noble and Heroin In Tahiti have hinted at his bracing off-roader headspace, but he bears all on Fever Logic. Six songs smeared across 40 minutes, Pyle positions each composition as a slow-motion funereal landslide, grey clay electronics losing form, echoes of processed guitar, depressive synth mist, all drizzling down over his wailing prisoner’s prayer vocals. A few flirt with slightly more overt goth-gaze signifiers (“Walking Into The Light,” “We Come Spinning Out Of Control”), but the rest heed closer to some kind of miasmic electronic abstraction mode, merging submerged mumbling and isolationist field recordings with intensely personal descension melodies and spacious cathedrals of ritual guitar. As with so many of Pyle’s past steps, it’s all-consuming and all out on its own (the only guest appearance is his brother, Jon, echo-plexing some occult percussion to the opening track). LPs in reptile lodge artwork designed in-house. 240 on opaque maroon vinyl, 210 on black. Edition of 450.