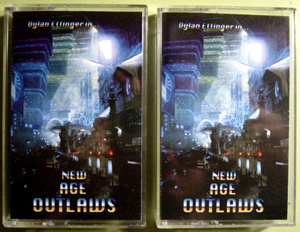 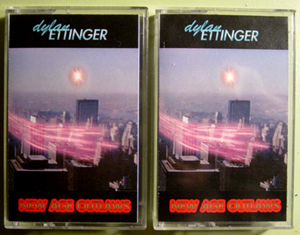 2009 was a bomb year for Bloomington’s finest, D Ettinger Esquire: grips of great tapes, a slaying single (“Smokin’ b/w Miami Heat”), plus a stack of crack magic from his label, El Tule. Thumbs up. 2010 is shaping up to be boss too, with an LP on Digitalis, and now this 50 minute opus, New Age Outlaws. A patient, layered, crypnagogic odyssey through a dystopian parallel universe metropolis glittering with towers of neon and cabalistic pawn shops (run by sharks like Rico) and outside-the-law loners down on their luck (enter Gordon), this is Ettinger’s weirdest and most baroque soundtrack to date. Wonky, echoing synths pitter-patter arpeggiated messages of retro-futuristic melancholy and blade runner blues while primitive drum machines pulse and whirr under the muted blur of the city. Repeated listens reveal strange secrets, hidden plotlines. Allegedly this is the end of Ettinger’s post-Moroder/robot sleaze/soundtrack era, so who knows what the future holds. Whatever it is, we’ll be there. Pro-dubbed tapes in cases with two different screen-grab cover designs. Edition of 200.