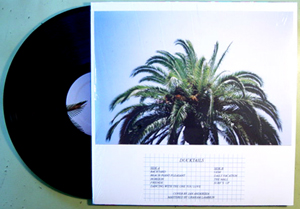 Plastic palm trees. Beach scene snowglobes. Airbrushed neon sunset hotel paintings. All shining examples of potent Fake Escapism at work, in real life. And if you’ve ever wondered what the audio equivalent of this kind of cheap coastal utopian simulacrum is, take a good listen to the recorded works of Mr. Matt Mondanile aka Ducktails, a crazy talented suburban New Jersey post-teen who serves up masterpiece after blasterpiece of shimmering, smoke-and-mirrors exotic fantasia, rainbow psych-pop muzak for imaginary helicopter rides over crystal lagoons and lost waterfalls. His self-released tapes dropped over the past year-plus have seen his basement guitar/rhythm hypnosis instincts gently arcing upwards into a total art form, and this, Ducktails’ debut full-length, is the absolute zenith of the vision. Lazy island percussion loops under blissed horizons of hovering synth colors, warm jangly wah-wah guitars lap like waves alongside casual hammock-chilling vocals; song titles like “Beach Point Pleasant” and “Dancing With The One I Love” further articulate Mondanile’s mood agenda: maxin’ & relaxin’. A few numbers get a bit more tripped/spaced in a loosely post-Skaters model, but those parts function less like a drug ride and more just like the hazy time of night after the beach bonfire’s burned out and you pass out on the sand, holding hands with someone special, staring up at the stars. What do you see? Endless blackness? Or a new BFF? Mastered by Graham Lambkin (of The Shadow Ring), with cover artwork by Jan Anderzen (of Kemialliset Ystavat/Tomuttontu). Black vinyl LPs in matte jackets plus a photocopied insert.