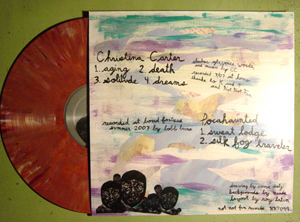 Been beautifully blissed on this pairing for months now and we’re amped it’s finally public unveiling time. Christina Carter has trekked around this country (and planet) countless times in the past decade plus, both by herself and with Tom Carter in Charalambides, and the constant gypsy-drifting has weathered her song-stories down into spare, spiral reflections on life, death, and afterlife. Here she lays down four perfect vignettes of acoustic guitar pattern, softly sung desperation, and dangerous intimacy. A beatific bring-down. Sisters-with-voices Pocahaunted handle the B side wax, and their two tracks span the psych-ward spectrum from doomy warpath exile (“Sweat Lodge”) to octave-climbing estrogen ecstasy cloud-tripping (“Silk Fog Traveler”). Both were recorded by Bobb Bruno at Eagle Rock HQ across summer ’07 and cling like cotton to the memory banks. Marbled-peach vinyl LPs in matte jackets with hooded/devoted artwork by Carrie Dietz.