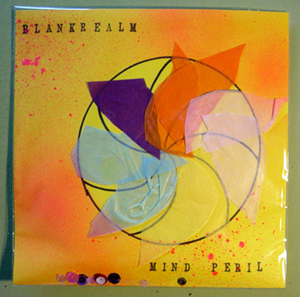 So many steaming heaps of uniquely fried brains litter the “down under” underground landscape (Australia, NZ) you begin to worry for their greater wellbeing, health, sanity. But, at the same time, it’s hard to complain ‘cause those same forces have done wonders for the world’s weirdo CDR collections. Paeces, Lakes, all the Bros ‘o’ The Occult Sisterhood shit, Terracid, xNoBBQx (most of those Breakdance The Dawn bands, actually), Naked On The Vague, etc. – there’s a damn ARMY of Australasian gangs throwing up freaky signs and bizarre strains of audio consciousness, and we are all the richer for it. But our favorite such clan for the past year plus is Blank Realm. They’ve been emitting a steady smokestack of work-in-progress documents showcasing their pan-genre collective symbiosis the last couple years and each new cloud they puff out is a headier, heavier beast than the one before it – and Mind Peril shows they’ve yet to even plateau. Self-released by the band early in ’08 in a micro-edition of a few dozen, we were fairly floored by it, and offered to spread the gospel a bit more. Crouched hermetic energies spiral through electric heavens, animal clatter, basement trance, zoned percussion: this is Blank Realm at their blankest and best. NNF edition has a new track sequence, and is pro-dubbed on high-quality chrome cassettes. In oversized, hand-stamped, spray-painted cardstock sleeves with hand-ripped rainbow-tissue collage artwork. Edition of 100.