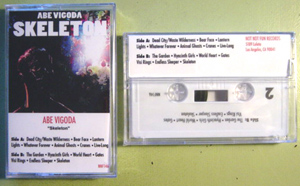 Shit is cliché, but ya can’t fight the fact that time changes EVERYTHING (or wait, maybe money does?). Either way: we’re pretty old but not so old we’ve forgotten the cradle days of early Abe Vigoda shows when they only liked Smashing Pumpkins, short shorts, and boating shoes, and their sets were short spiky blasts of post-Unwound lo-fi outsider-punk (a la the Sky Route/Star Roof LP). That was a looong time ago. But like all good bands the Vigodans have re-invented themselves a half dozen times since then, and it’s been a rad ride to witness the evolution/transformation, especially since their journey’s culminated in the total sparkling tropic magic sunbath of Skeleton, the best AV record ever. Years of fiddling with delay pedal settings and intricate bass/drums equations somehow resulted in a weird, bright, upbeat island punk sound that’s as catchy and life-affirming as it is tripped-out and overwhelming. Who knew? Catch these die-hards at a show in yr neck of the woods any day now; they are on perma-tour. Pro-dubbed cassettes in a “Columbia Records”-style J-card. Edition of 200. This album is also available on CD and LP from our friends at Post Present Medium.