Torn Hawk – Through Force Of Will CS 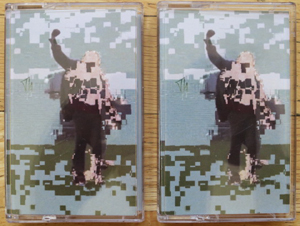 Luke Wyatt’s looping night-rider trance-rock instrumentals as Torn Hawk often tend towards the moody/brooding side of Brooklyn’s rhythm nation but for Through Force Of Will he’s flipped the script, flexing his powers for hope not mope, for rallying through those final workout reps, ripping through the tape at the finish line, pumping fists to the sky over city hall. Triumphant guitar-shred blisters atop steady cardio drum machines and heartbeat synth-basslines, invoking a FX-scrambled montage of sweaty crunches, marathons through the mountains, and muscle beach dreamers keeping the faith. There’s a few respites from the modal inspiration-rock but even these fit into the album’s olympian game-plan: a lulling calm after the endorphins fade (“Hutchison”), a sleepless midnight, haunted by past defeat (“A November Mission”). The rest of the cassette’s 50 minutes stay on task though: the champion returned, indomitable, overthrowing the palace, streets on fire, a trophy the size of the sun soaring into the horizon. Mastered by Brian Pyle. Video mulch artwork by Luke Wyatt, designed by Britt Brown. Edition of 100.