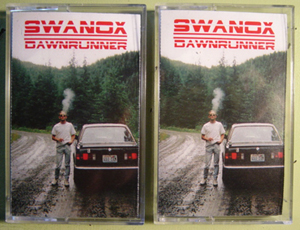 Anthony Swanox has been shadow-walking the greater west coast for a half-decade-plus at this point by our count, operating in various capacities, from helming the moss-cult micro-label Caligula Recordings to contributing percussion for live Sudden Oak actions to his own erratic stream of tranced private modes under the Swanox moniker. Past CDRs and tapes were bathed in a blacker light, crawling through various doom-haunted ambient sludge parking lots, but Dawnrunner hitchhikes down a markedly different road. The album opens with a hot springs soak in glowing, long-form new age ritual electricity before slowly dissolving into a patchwork of mumbly, loner drone-folk and hypnotized dusk hikes through fields of wet ferns. There’s an inner peace vibe to many of the B side pieces that’s never been heard in a Swanox sound-structure before, and the evolution feels brave. A strange collection of questing songs from a rad west coast lifer. Pro-dubbed cassettes in cases with cool photo portrait covers of Swanox’s brother, smoking by a beamer in the forest. Take the ride. Edition of 100.