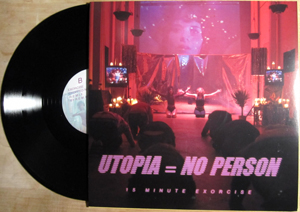 We first met the Sisters Larson (aka Prince Rama Of Ayodhya aka Prince Rama) in 2009 in Texas, where they had a brief stop during their inaugural road-warrior bicoastal US tour. They had feathers in their hair and gave us a CDR covered in sequins and fake fur. Since then a lot has happened: they signed to Paw Tracks, someone joined the band and left the band, they toured the US and Europe at least three more times, and – relevant to this release – they got invited to fashion a conceptual art performance for the Manhattan gallery, Issue Project Room. The topic they chose to explore was very P Ramanian: the ritual nature of exercise, body movement as a form of exorcism, trance-inducing physicality, etc. They staged an elaborate song-and-dance with costumes, crystal skulls, prayer aerobics, Krishna statuettes, and astral projections. Thus was born Utopia = No Person, a 19-minute shamanistic electro work-out anthem, equal parts apocalypto opera, hippie ecstasy, and new wave cardio dance. It’s a strange vision but one perfectly in keeping with the sisters’ Now Age hypothesizing and joyous psych tribalism. The B side features an otherworldly chopped-and-skrewed dream-syrup reworking by R.E.M. Koolhaas (aka Landon Odle of the Animal Image Search label). Black vinyl LP in jackets with a stylin’ cover portrait (by Corey Towers) of Taraka and Nimai decked out in unitards/leotards, gold lamé leggings, white Reeboks, the works, plus a full-color double-sided insert. LP layout by NNF faves New Feeling Industries. Edition of 600.