Law Of The Rope – Beasts Will Have You CS 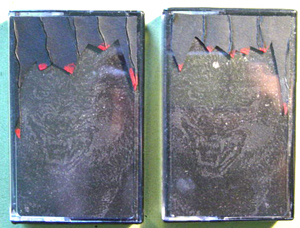 Old folks often spout off to kids about not gettin’ in the car with strangers, but that doesn’t mean you can’t release cassettes by them. Good thing, too, cause bands creep outta the woodwork all the time with hoods on their heads and a fine master in their hand, and who’re we to give ‘em some inquisition shit? Law Of The Rope is an alleged trio (Nadine, Legin, and Beatrix Oppression, in case yr wondering) from the “United States Minor Outlying Islands” who mine an idiosyncratic vein of isolated bedroom black metal somewhere between the more miserablist symphonies of Xasthur, the deranged 8-track stream-of-consciousness grooves of Lurker Of Chalice, and the harsh arctic blasts of Wold. We’re no experts on the subject, but Beasts Will Have You holds its own against all those touchstones, and even adds a nice non-metal dimension to a lotta the songs that free ‘em up from the genre’s restrictions/expectations. The tape’s 2 16-minute-ish sides stalk through the spectrum of foul moods, at turns caged and violent, other times awash in arch-gothic negative grandeur, fleshed out with somber strings and icy life-in-prison-style keyboards. Bleak is back. Pro-dubbed & imprinted cassettes in black-on-black devourer art cases with black-and-blood fangs glued to the plastic. Edition of 100.