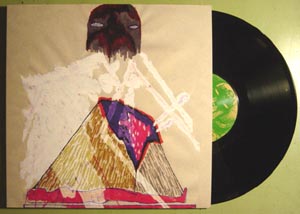 L.A.’s rep as a hometown to heaviness is backed up by a lotta props: Richter Scale earthquakes, Vin Diesel racing an army camo hummer down Sunset Blvd on a daily basis, Buzz Osbourne loitering at pretty much every flea market within walking distance of a greasy spoon, etc. Oh, and the sick & twisted Sunn amp-manglings emanating from the respective lairs of Goliath Bird Eater and Sasqrotch. GBE is the half-decade-strong gauntlet through which Eagle Rock-based Teen Choice Award-winner Bobb Bruno gives voice to his solitary metal ruminations, and oftentimes riffs germinate in his brain/fingers for YEARS before being finally committed to 8-track. After a string of shaky drummers, he solidified shit enough to lock this timeless psych-crusher in the can. “Blood Silk Road” slow-rides a lumbering, doomy crawl before post office local (and Wilco wild card) Nels Cline steps in with an eyeball-shredding guitar solo that crescendos the song into a black light hurricane of monolithic pummel. Kill me now please. Highland Park’s Sasqrotch cruise in a scummier mindset, rolling together depraved sax attacks, freakish costumes, and even the occasional bouzouki curveball intro into their mythically hirsute spliff before torching it in a blaze of drums and drop-tuned oblivion. Their B offering, “Menstrual Cyclone,” is a fairly archetypal document of the road-tested freeform ripper they were jamming live for most of the latter half of ’07. Suck it down. Black vinyl 10 inches in printed jackets, plus a hand-numbered insert, with artwork by French electronic enigma Kikifruit. Edition of 400.