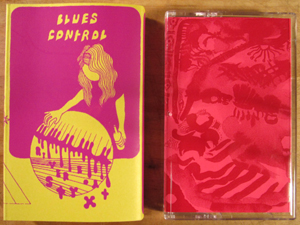 Roving groove crew Blues Control have been ranging around the eastern seaboard slanging their rarefied strain of jazz keys and roadburn riffs since at least ’06, but it wasn’t till last year that life/art took them to Tokyo, where Ryo Kuramoto played roadie and driver for their week-long tour of Japan. Via that hangout/hookup, plans were made to reissue BC’s dope half-decade-old OOP tape on Fuck It Tapes (remember that label?), Riverboat Styx, which has sat high in our personal cassette hall of fame ever since it first dropped. So we’re heavily stoked to offer up this swankly silkscreened deluxely revamped second-wave edition, which comes housed in an amazing cardstock outer case, plus a double-sided silkscreened J-card (the back has a stylin’ photo of Russ & Lea chillin’ in a Tokyo alley), plus a gold-ink insert, with all original artwork by Ryo. Co-released with the endlessly epic Crooked Tapes. ALSO: while supplies last, all orders come with a cool Blues Control pin drawn/made by Ryo as well. Edition of 175.